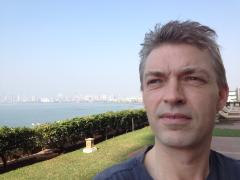 I’m Associate Professor at the Department of Computer Science at the University of Copenhagen and manager for the HIPERFIT Research Center. Here is my background at a glance:

From April 2008 to May 2012, Chief System Development Consultant and Team Leader in SimCorp - a Danish company specializing in software for the financial industry. From March 2003 until April 2008, Associate Professor at the IT University of Copenhagen, Denmark (ITU). From February 2006 until August 2006, CTO at Zecure, a small company focussing on solutions for Internet payment processing and e-commerce fraud detection. From January 2000 until March 2003, Assistant Professor, partly at the Institute of Mathematics and Physics, Royal Veterinary and Agricultural University of Denmark (KVL) and partly at ITU. In 1999, Postdoctorial Researcher in the BANE research project at University of California, Berkeley. Late in 1998, I obtained a Ph.D. degree from the Department of Computer Science, University of Copenhagen (DIKU).