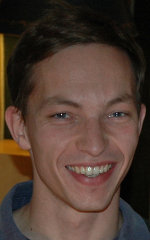 I am a Researcher at Samsung Research America in Mountain View, California. Before that I was a Post Doctoral Fellow working with André Platzer in the Logical Systems Lab at Carnegie Mellon University. I received my Ph.D. in Computer Science from Cornell University in 2013, where I was advised by Dexter Kozen. I also received a Master of Engineering in Computer Science from Cornell University in 2008, and a Diplôme d’Ingénieur from École polytechnique in 2007.