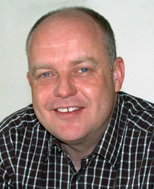 Christian also works as expert researcher at the Computer Systems Laboratory of the Swedish Institute of Computer Science (SICS).

Before joining KTH in 2002, he got a diploma in computer science (with a minor in mathematics) from the University of Karlsruhe, Germany (1992), worked as a researcher and project leader at the German Research Center for Artificial Intelligence (DFKI) (1992-1997) and as a researcher at Saarland University, Germany (1997-2002), from which he also obtained a doctoral degree in engineering (2001). At KTH, he earned a docent degree in computer systems in 2009.